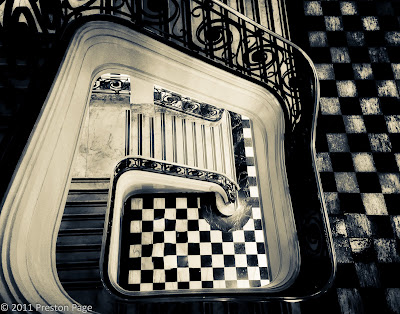 About a year ago I posted two pictures of this staircase at the St. Louis University Museum of Art that were single image HDR mappings.  Today I returned to to make bracketed shots from a different angle with a wider lens.  Processing steps include passes through Nik HDR Efex, Photoshop CS5, Nik Color Efex Pro and Nik Dfine.  Nik Silver Efex Pro 2 was the final step, applying a strong blue filter, blue/sepia split tone and the Agfapan 100 film preset. 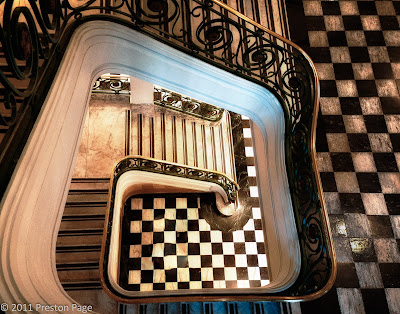 Posted by Preston Page Photography at 7:09 PM No comments: Links to this post 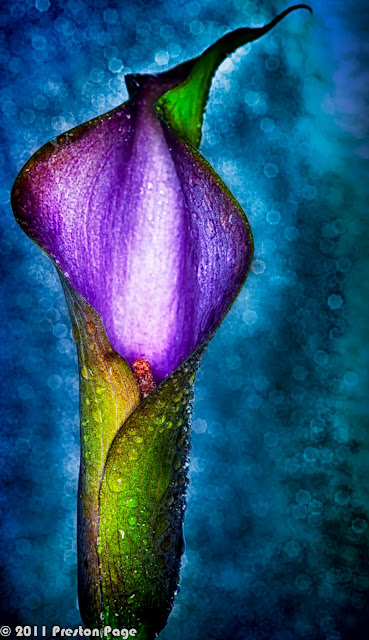 After several weeks of schedule conflicts, Susan and I finally made it to the studio to collaborate on a series of flower pictures.  Our first subject is this calla lily, actually a sickly plant we picked up at Trader Joe's, but we liked the bloom.  I noticed that Susan has been looking at a lot of Gustav Klimpt's paintings lately, so I thought I'd make a picture using technique that pays its respects to his work. 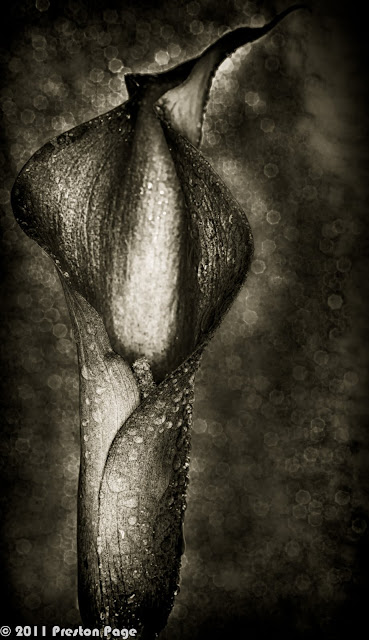 For the monochrome variant, I went with the Platinum process, which was new in Klimpt's day, with Nik Silver Efex Pro 2 using my own Platinum preset and a K2 equivalent filter. 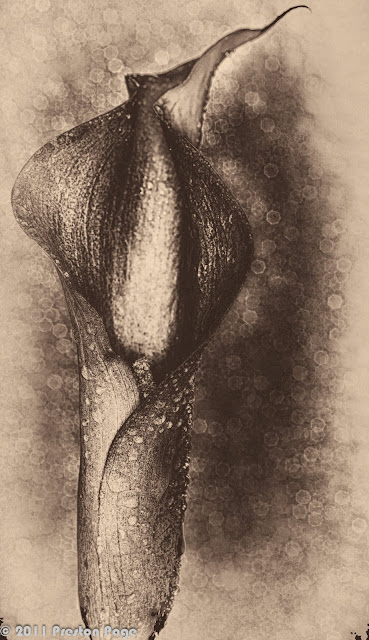 Going even older old school, a runner up for me is this antique print process, one of the new presets in Nik Silver Efex Pro 2.  The defaults are too flat for my taste, but served as a starting point.

Posted by Preston Page Photography at 8:19 PM No comments: Links to this post 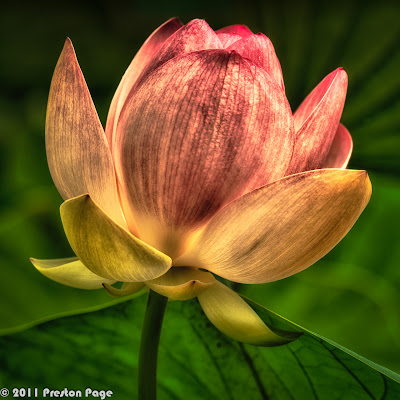 One last lotus blossom for the season, adjacent to the previous post.  Even though the angle in relation to the sun was only about 15 degrees different, the full back lit glow is missing.  Still, I liked the composition and clicked off the bracket series. 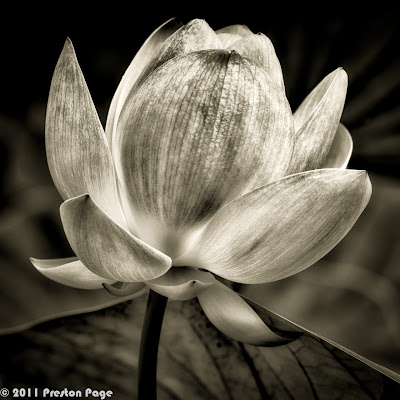 The monochrome generated by Nik Silver Efex Pro 2 is a platinum print preset I developed.

Posted by Preston Page Photography at 9:45 PM No comments: Links to this post

A handful of lotus flowers were still in bloom in the Japanese Garden at the Missouri Botanical gardens last Saturday morning.  A hazy sun back light really brought out detail and texture, captured by the magical Nikon 180mm "Leni Lens".  I wound up making four versions and would love to hear from you if you have a preference.  The last step for #1 was to apply a partial "CSI Miami" glow effect in Nik Color Efex Pro.

Inspired by the exquisite work by Irving Penn, I came up with a Nik Silver Efex Pro 2 process preset that is very close to the look of a Platinum-Palladium process, especially when printed on a good matte paper.

As an experiment, I decided to use the Nik Color Efex Pro 3 "Vignette Blur" tool to simulate the Lens Baby look.

This monochrome processing preset in Lightroom 3 started out as an approach for nudes, but it has come in handy for botanical subjects, too.

Posted by Preston Page Photography at 10:09 PM 5 comments: Links to this post 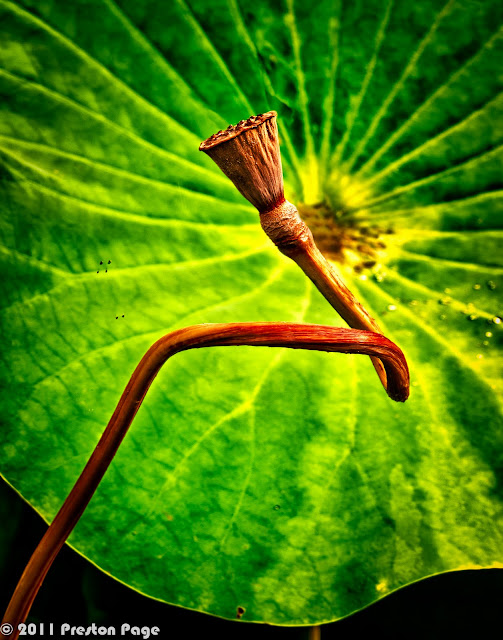 Drying in the sun causes the lotus flower stalks to bend and curl as they slowly collapse. 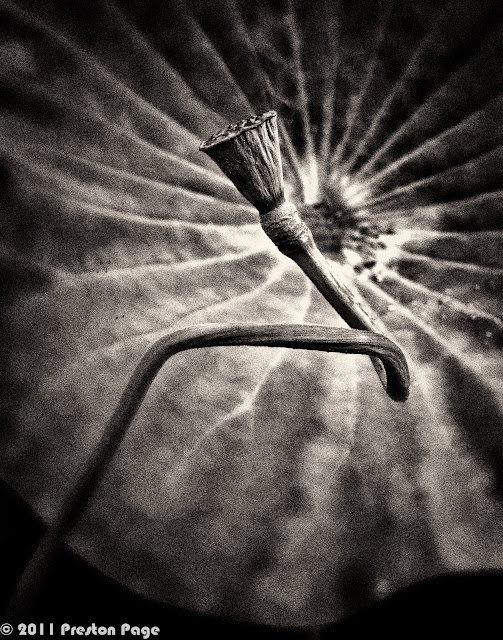 The monochrome here is from my "Grainy Nude" preset in Lightroom 3. 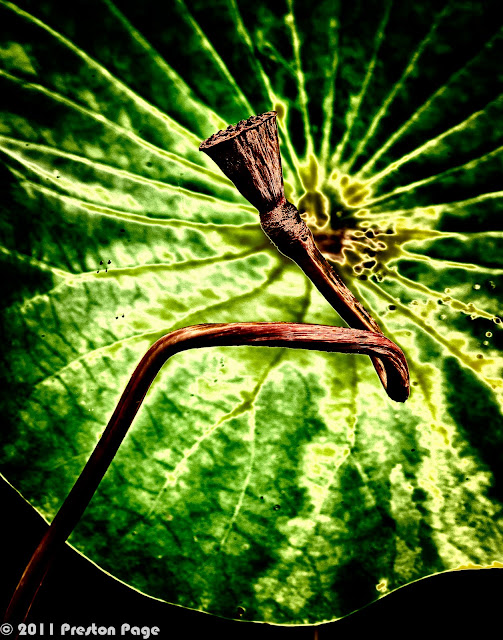 And I had to try a solarization version in Nik Color Efex Pro 3.
Posted by Preston Page Photography at 8:38 AM No comments: Links to this post 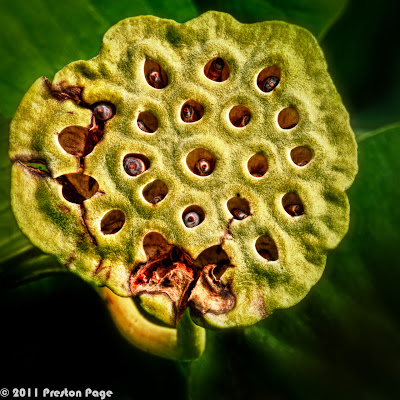 I was about a month late to catch the lotus blooms at Missouri Botanical Gardens, but I found some details I thought were interesting.  For instance, this lotus seed pod drying in the sun looks a little bit like damaged cherry pie.  Processing involved combining three 1-stop brackets in Nik HDR Efex, levels adjustment, lens correction and minor retouching in Photoshop CS5, local color adjustments for each corner in Nik Vivenza and finally focus vignetting in Nik Color Efex Pro 3. 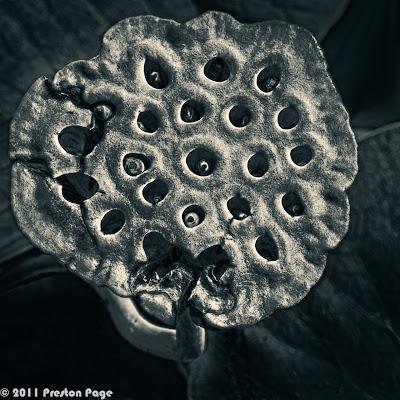 This monochrome is courtesy Nik Silver Efex Pro 2, starting with the Fine Art preset and finished with a blue filter, lens 1 vignette and blue/sepia split tone.

Posted by Preston Page Photography at 6:36 PM No comments: Links to this post